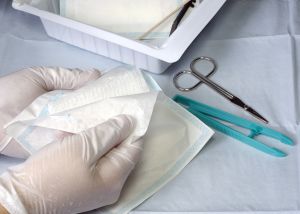 Chronic wounds represent a major burden on the quality of life of those affected. To improve their situation, multilayer films of chitosan, alginate and the fibroblast growth factor FGF2 were prepared in the presented study and their potential as wound dressings was investigated.

Chronic wounds are a major problem for the healthcare system, especially in view of the aging population, and greatly reduce the quality of life of those affected. They occur when the healing process is disturbed, for example, by chronic diseases such as diabetes. The area often suffers from destruction of the extracellular matrix, high levels of reactive oxygen species, lack of aeration and bacterial infections.

To prevent this and promote wound healing, suitable wound dressings are necessary. Optimal properties are that they are non-toxic, maintain a moist wound healing climate while allowing good gas exchange, and protect the wound from bacterial infection. In addition, studies had shown that the addition of growth factors such as fibroblast growth factor FGF2 have a positive effect on wound healing. Previous approaches had been based on single-layer wound dressings, which are limited in the addition of other healing-promoting substances.

For this reason, in the study presented here, a multilayer, free-standing film (FSF) was prepared using the layer-by-layer technique. This is based on the use of two oppositely charged polyelectrolytes, in the case the positive chitosan and the negatively charged alginate. Chitosan has the properties of being antibacterial, anti-inflammatory and hemostatic. Chitosan with a viscosity of 500 mPas and a DDA of 85% from Heppe Medical Chitosan GmbH (85/500) was used in this study. Alginate, on the other hand, can absorb body fluids and absorb water. In this study, the wound dressings are functionalized via crosslinking of 1-ethyl-3-(3-dimethylaminopropyl)carbodiamide (ECD) with N-hydroxysuccinimide (NHS) or genipin and loaded with FGF2. Subsequently, the prepared FSFs were physically characterized and fibroblast growth and migration were tested in vitro. In addition, the in vivo biocompatibility of the FSFs as wound dressings was investigated using a mouse model.

Summary: In the presented study, FSF were successfully prepared from chitosan and alginate by layer-by-layer technique. In particular, G-FSF showed great potential as a resorvoir for sustained release of FGF2. The generated films also showed good biocompatibility and antibacterial properties in vitro and in vivo. By stimulating fibroblast growth and migration, the generated FSF are interesting candidates for bioactive wound treatment.