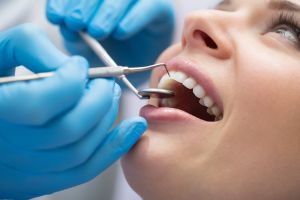 Good dentures are becoming increasingly important as the population ages. Conventional materials for the base of dentures are often porous and thus susceptible to deformation or microbial colonization. To prevent this, chitosan is added to polymethyl methacrylate resin in the presented study.

Due to the increasing aging of the population, dental prostheses are becoming more and more relevant to maintain stomatogenic functions. The base of dental substitutes often consists of polymethyl methacrylate resins. These exhibit acceptable esthetics, are easy to manipulate, and are available at a cost-effective price. However, acrylic resins have a porous structure, which leads to an increased risk of deformation and curvature of the denture base by creating internal stress. In addition, microorganisms deposit more easily on porous surfaces, which can lead to the formation of biofilms. In particular, Streptococcus mutans is considered to be one of the most relevant cariogenic species deposited as plaque on tooth surfaces.

To reduce the porous structure and susceptibility to microorganism attachment, optimizing acrylic resins with polymers such as chitosan is one option. Chitosan is bioactive, biocompatible and biodegradable. It also has antibacterial and antifungal activity due to its positive charge. Functional groups make it easy to modify via crosslinking.

The aim of the study presented here is to investigate the effect of 1% and 2% chitosan on the porosity of polymethyl methacrylate. In addition, the antibacterial effect of the chitosan-acrylic resin mixture on Streptococcus mutans is investigated.

Conclusion: In the presented study, it was shown that the addition of 1% and 2% chitosan and acrylic acid, respectively, to polymethyl methacrylate could reduce porosity as well as microbial growth.

Chitosans of different specifications can be found in our shop. If you have any questions, do not hesitate to contact us by mail.