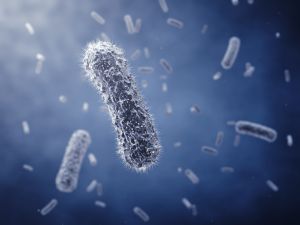 Due to the increase of infectious diseases and the development of antibiotic resistance, new antibacterial substances are needed. In the presented study, novel chitosan-AgIO3 bionanocomposites were synthesized and their antibacterial properties were investigated.

The increase of bacterial infectious diseases with a parallel increase of antibiotic resistances make the development and synthesis of new antibacterial agents necessary. Pathogenic microorganisms such as Pseudomonas aeruginosa, Klebsiella pneumoniae, Staphylococcus saprophyticus, Staphylococcus aureus or Escherichia coli are conventionally treated with antibiotics such as penicillin. An alternative option, e.g. as a wound dressing, can be silver hydrazine.

Nanomaterials also have a high potential for combating pathogenic bacteria. These have a large contact surface for microorganisms due to their high surface-to-volume ratio. When synthesized by Green Chemistry, bionanomaterials can be synthesized in an environmentally friendly manner under mild reaction conditions. Biopolymers such as chitosan are particularly interesting as materials. On the one hand, these are biodegradable and, in the case of chitosan, the large number of hydroxide and amine groups ensures that the bionanocomposites are highly modifiable.

Another material known for its antimicrobial capabilities is silver nanoparticles (AgNPs). These nanoparticles can attack cell membranes of microorganisms by forming reactive oxygen species, thereby eliminating them. To exploit all these capabilities, chitosan-AgIO3 bionanocomposites were prepared in the presented study. These were then analyzed and characterized in terms of their antibacterial capabilities against different microorganisms (Staphylococcus aureus and Escherichia coli). The bionanocomposites were compared with penicillin and silver hydrazine.