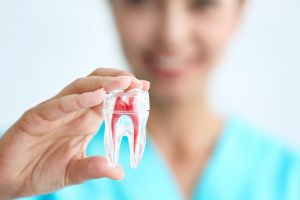 Dental erosion is the demineralization of the hard tooth substance caused by acids. Particularly in industrialized countries this is an increasing problem due to changes in drinking and eating habits in recent decades. Additionally, the teeth surface is eroded by mechanical interaction like brushing. To substantially reharden demineralized enamel, the development of appropriate prophylaxis and therapy is important. HMC presents two studies that tested toothpaste and mouth rinses containing chitosan.

The goal in prophylaxis/therapy is to reduce acid exposure for reduction of demineralization, decrease surface hardness and susceptibility to mechanical wear. In addition, the solubility of tooth tissue should be reduced if acid exposure cannot be eliminated. It is well known that the use of fluorides reduces the demineralization of enamel.

The primary mode of action of F/Sn preparations is the retention of tin ions (Sn2+) and the incorporation of tin into the enamel. For mouth rinses containing fluorine and tin, it has already been shown in situ that tissue loss can be reduced by up to 70%. When used as a toothpaste, there is the problem that toothbrushing causes loss of enamel. Chitosan has promising properties to improve the effectiveness of F/Sn toothpaste, as the biopolymer forms a protective layer on the tooth surface. The aim of the study was to investigate whether chitosan increases the anti-erosive efficacy of fluorine/tin-containing toothpastes and the influence of viscosity. For this purpose, 192 teeth from human donors were randomly divided into 2x 6 groups with 16 samples each. Chitosans by Heppe Medical Chitosan with a deacetylation degree of 80% were used for the study. The stated viscosities (mPas) describe the viscosity groups (more information see specifications).

The study was conducted in two experimental branches (E1/E2). The enamel samples were cyclic demineralized (10 days, 6x 2 min per day with 0.5% citric acid). Half of the group (E1) was exposed to toothpaste (2x 2 min) and the second half (E2) was additionally brushed with a machine (2x 15s per day). The loss of tissue was determined and elemental analysis of the sample surface and the toothpastes particulate fraction was performed. In addition, SEM was used to analyze the sample surface.

Conclusion: The viscosity of the chitosan used has an influence on the efficacy of F/Sn toothpaste. Chitosan with a viscosity around 1000 mPas showed the best protective effect with higher tin retention on surfaces and lower absorption of tin by abrasives.

Previous studies have already investigated the daily use of mouth rinses with titanium tetrafluoride (TiF4) and sodium fluoride (NaF) by patients at high risk of enamel erosion. The effect of TiF4 is based on the reaction of titanium with phosphate from apatite, forming a glaze-like acid-resistant layer. A previous in situ study on damaged enamel showed similar effect for a TiF4/NaF solution compared to a commercial solution containing SnCl2/NaF/AmF. A possible way to improve the oral rinse could be to increase the viscosity with chitosan. A protective effect against tooth erosion has already been shown for the addition of chitosan to zinc/fluoride toothpaste.

The authors of the study investigated the protective effect of solutions with TiF4/NaF and chitosan against enamel erosion in vitro compared to conventional SnCl2/NaF/AmF solutions. It was hypothesized that the addition of chitosan would increase the protective effect of TiF4/NaF solutions. Chitosan 75/500 (deacetylation degree/viscosity) and Chitosan 75/2000 from Heppe Medical Chitosan GmbH were used for the study.

In the study, bovine enamel samples (in vitro) were treated with the following solutions (15 samples per group):

The bovine enamel samples were subjected to pH cycles for seven days. They were treated with 0.1% citric acid (pH 2.5) four times a day for 90s. The rest of the time and overnight, the samples were exposed to artificial saliva (pH 6.8). After the last citric acid treatment, the samples were treated daily for 30s with the above solutions. Changes in surface reflectance intensity (%rSRI) were measured after day 1. The erosive enamel loss was quantified by contact profilometer after 7 days.

Conclusion: The TiF4/NaF solution with higher viscosity chitosan (Chitosan 75/2000) has a comparable protective effect against enamel erosion as the commercial control solution. Further studies should investigate the results under more complex conditions using human saliva and simulating tooth brushing, as the protective layer produced by chitosan becomes firmer and stronger in the presence of salivary proteins.