HomeNewsScientific news - ChitosanChitosan and curcumin for treatment of glaucoma or cancer 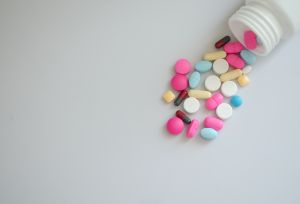 Glaucoma is a group of diseases of the eye with damaged optic nerve and retina in advanced stages, possibly leading to blindness. One of the causes is increased intraocular pressure. Here, we present two publications, which investigated the combination of chitosan and curcumin for treatment of glaucoma and cancer patients.

The anterior chamber angle is located between the cornea and the iris through which the aqueous humor drains. In the case of a pathological change, the outflow of the aqueous humor is disturbed and the intraocular pressure increases, which can lead to the development of a glaucoma.

The trabecular meshwork is a structure in the anterior chamber angle that provides for the outflow of aqueous humor via the Schlemm´s canal. The smaller portion of aqueous humor leaves the eye via the uveoscleral outflow. The uveoscleral outflow can be increased by prostaglandins such as latanoprost. The undesirable side effects of latanoprost, such as dry eye disease, conjunctival hyperemia, and periocular skin hyperpigmentation, are problematic with prolonged daily use.

Recent studies show that oxidative stress in the trabecular meshwork also plays an important role in impaired aqueous humor outflow. In the presented study, the researchers developed a chitosan-gelatin-based hydrogel containing latanoprost and curcumin-loaded nanoparticles. Curcumin has antioxidant and anti-inflammatory properties, but its efficacy is limited when taken orally. Topical delivery to the eye with hydrogels allows to release active ingredients in a site-specific, long-term, and sustained manner. For this study, chitosan with a 95% degree of deacetylation and a viscosity of 581 mPas was used to prepare a thermosensitive hydrogel. The gelation temperature of the chitosan hydrogel was approximately 34°C. The biocompatibility of the developed chitosan-based hydrogel with latanoprost and curcumin nanoparticles was tested in vitro (rabbit corneal epithelial cells) and in vivo (rabbits). Additionally, its effect was tested on trabecular meshwork cells under oxidative stress.

Conclusion: The results of the study show that the developed chitosan-based hydrogel loaded with latanoprost and curcumin nanoparticles improves aqueous humor outflow via trabecular and uveoscleral pathways, offering potential for an improved treatment of glaucoma patients.

The second publication deals with the oral delivery of curcumin with N,O-carboxylmethyl chitosan modified nanoparticles.

Cancer is one of the leading causes of death especially in the western world. One factor that critically affects the growth of solid tumors is the formation of new blood vessels (angiogenesis) to supply the tumor tissue. Therefore, the combination of anti-tumor drugs with anti-angiogenesis agents is an established therapeutic strategy. Problematic is that the inhibitors of angiogenesis have to reach the tumor tissue to exert their effect locally.

The researchers tested N,O-carboxymethylchitosan (N,O-CMC) surface-modified curcumin-loaded solid lipid nanoparticles (based on Gelucire® 50/13) for oral curcumin delivery. In previous studies, N,O-CMC was shown to inhibit angiogenesis and stimulate the immune system. For this study, N,O-carboxymethylchitosan from Heppe Medical Chitosan with a deacetylation level of 92.8% was used. The researchers evaluated the modified nanoparticles for stability in simulated gastrointestinal fluid, as well as in cytotoxicity, uptake and transport studies with Caco-2 cells (intestinal cells). The anti-angiogenic activity was also tested in vivo in the chorioallantoic membrane assay in chick embryos.

Conclusion: The developed and tested N,O-CMC surface-modified curcumin-loaded lipid nanoparticles have potential for oral delivery of curcumin. The system could combine inhibition of vascular angiogenesis and oral delivery of anticancer drugs, but further in vivo studies are needed.

Find out more about our carboxymethylchitosan here. You can order CMC directly in our shop.