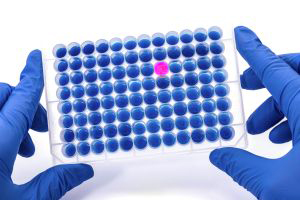 In the rFC assay, recombinant factor C is activated by endotoxin binding and converts a substrate into its active form, which is quantified by fluorescence photometry. The measured fluorescence signal is directly proportional to the endotoxin concentration of the sample solution.

In comparison, the LAL assay is based on a more complex enzyme cascade, which leads to false-positive results in the presence of ß-glucans by activation of the limulus protein factor G. This is also a problem in the testing of chitosan and chitosan derivatives due to the presence of ß-glucans, which is why the rFC test is a more suitable analysis method for detection of endotoxins in chitosan.

At HMC+, the recombinant factor C assay is an established and validated test method for the detection of bacterial endotoxins for several years. Endotoxins contents below 100 EU/g Chitosan (0.1 EU/mg) can be quantified using the rFC assay.

In addition, the rFC assay is independent of horseshoe crab blood containing the limulus amebocyte lysate for the LAL assay. Since the extraction of lysate depends on the two highly endangered species, Limulus polyphemus and Tachypleus tridentatus, the establishing the rFC assay would be a positive development for the protection of the lysate source and the animal population.